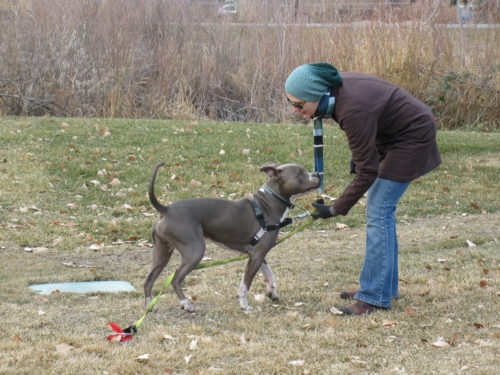 Do you wish that your dog would listen to you? We understand, and you are not alone. We want to let you in on a big secret that will get your dog to listen to you.

First, I will tell you a personal story. Seiki, my border collie, loved to run off-leash. I would take him everywhere to let him run and get exercise. When it was time to leave he wouldn’t always come to me immediately.

As a result, I was able to focus on training him instead of focusing on the stress that I would be late to my next activity or appointment.

I have had many clients where we have done dog training. Salt Lake City is where many of them lived, and they stressed about time constantly. They needed their dog to get in their crate now because they had to go to work now.

If you keep in mind that you need to set extra time, you won’t run into this problem. By having 10-15 extra minutes when it is time for your dog to get into his crate, you have time to train him BEFORE going to work instead of stressing about being late.

This is a huge secret that most people know about consciously but actually don’t put it into practice during their dog training. Salt Lake City dog owners will think you are odd because you will leave extra time between all transitions so that you have time to train your dog, but you will more calm.

You will also have the time to focus on getting your dog to listen rather than rushing into the next activity. Over time people will be impressed because your dog will begin to listen to you when time is pressed.

"Avoid These Mistakes in Your Dog Training." Obtain this Free Video Now.

Receive by Signing Up:

Free dog training tips will also be sent your way!

You have Successfully Subscribed!